“My lighter quit working on me three cigarettes ago, but I keep flicking the damn thing expecting it to light. That’s really how my life has been lately, broken and useless. If it wasn’t for all the anti-smokers informing me of my future death, I’d already think I was dead. All my money is tapped out and I’m begging for a light from a crowd of strangers. One wicked old lady felt the need to tell me how smoking is hazardous to my health. Thanks, like I didn’t already know that I told her. The surgeon general’s been warning me for years, but your screeching voice has really gotten through to me. Who knew pushing your values and opinions on to others actually worked? Since were being honest and forthcoming with our inner thoughts and opinions. Your handbag doesn’t match your shoes and the clown set up resting on your face is really distracting to the eye. It isn’t fooling anyone into thinking you are beautiful, but it is distracting to think maybe you aren’t that ugly. Four or five feet back that way I might even think you are female underneath it all. She called me an asshole and stormed off as I smiled.

Nonsmokers are useless. They should all be led out to sea. Pushes them off by the dock down by the harbor one by one. Thanks for your thoughts and concerns, and a boot to the ass. You know what I mean? Most of them are hypocritical bastards anyway. Put a little liquor in them and they are out here begging me for a light. Seen more than my fair share of them stumbling out here and deciding to take a Sunday drive down the sidewalk. Isn’t it amazing how drunks can forget words like no or force themselves on a woman and not remember, but they can find their cars in a white out blizzard and run over six people?

Been smoking ten years now and I’ve still been unable to take a life, but my own. I’m the real villain of this world. Maybe I should turn myself in to the police? Take responsibility for my actions. They might be looking for me as I speak and I should take the initiative and shout, I’m right here. Big government is always out to get the innocent ones. Though at least I could get a hot meal and a place to stay if they even bother to look down to see me. Maybe if I get desperate enough. If things could get any worse. But no one’s looking for me. Not anymore.

You could say I lost my money on the market like everyone else in recent history, but my market was the back room of bars and basements hidden away. Pissed away my money faster than I could earn it. Don’t be like that. Never a good idea to be like that. Knowing better doesn’t make it any easier to face the truth or help yourself. Some might say it only makes things worse. Knowing what you know after the fact. I have a real hard time picking winners if you know what I mean. Bad luck must be something of a disease caught at birth. Sometimes people have it and sometimes people don’t. My father had all the luck in the world and my uncle couldn’t rub two pennies together to warm his fingers.

Buddhists would call bad luck karma, but that’s just all a bunch of horse shit. Stand still long enough on this street and you’ll find some waiting for you. Damn carriage horses just be walking by and drop a big old pile right by your head. Feet from where you sleep. They don’t give a damn. Same with fate and all that other crap people tell you about life and luck. No one gives a damn. That should be a crime if you ask me. Don’t see anyone of these people going up to them and pestering them about what they are doing. If anyone needs to be reminded about the shit, they leave behind it is those worthless pricks. Life is all about luck.

Some would say I’m bitter, but really, I’m just unlucky. Unless you count the fact that I’m still breathing, but then again that is only because I haven’t died yet. Nothing special about that at all. Nope the lord hasn’t pulled my straw just yet even if he has unstrung my bundle. Still breathing and still struggling through life’s endless shit storm, and life is a real shit storm. Believe me I would know. Seen a few things that would make you question your own reality. Let alone the existence of some unknown figure watching over our daily mistakes.

What do I know though? I know I am to blame for where I am. Don’t for a second be so cynical to think that I didn’t know that. I went to school for a few good years. Didn’t finish like I don’t finish most things. Searching for that easy money there’s no time to see anything through. The American dream or something like it. Rich by sunrise. Free as a bird on Sunday. Call it American if you want. It’s all the same everywhere. Struggle is struggle in any language. Only thing any of us have in common, I guess. What do I know about the world? Barely made it out of my concrete bed this morning let alone out of the country.

Could this place really be worth losing everything over? Worth giving up the freedom of sin? I’d trade it in for a carton of cigarettes and a government check. Like most of us I’m too proud to realize how good I might have it. Too busy thinking I need something better. I know better now. Took a lifetime, but now I know. What could anyone else ask for? Fine clean air and someone to talk to. Lord couldn’t ask for a better day if it was his dying wish. It’s a long and lonely road out here. You know what I mean? Enough of my rambling. What does life and luck mean to you?”

She pulls her ear buds out, “Did you want a dollar or something?” 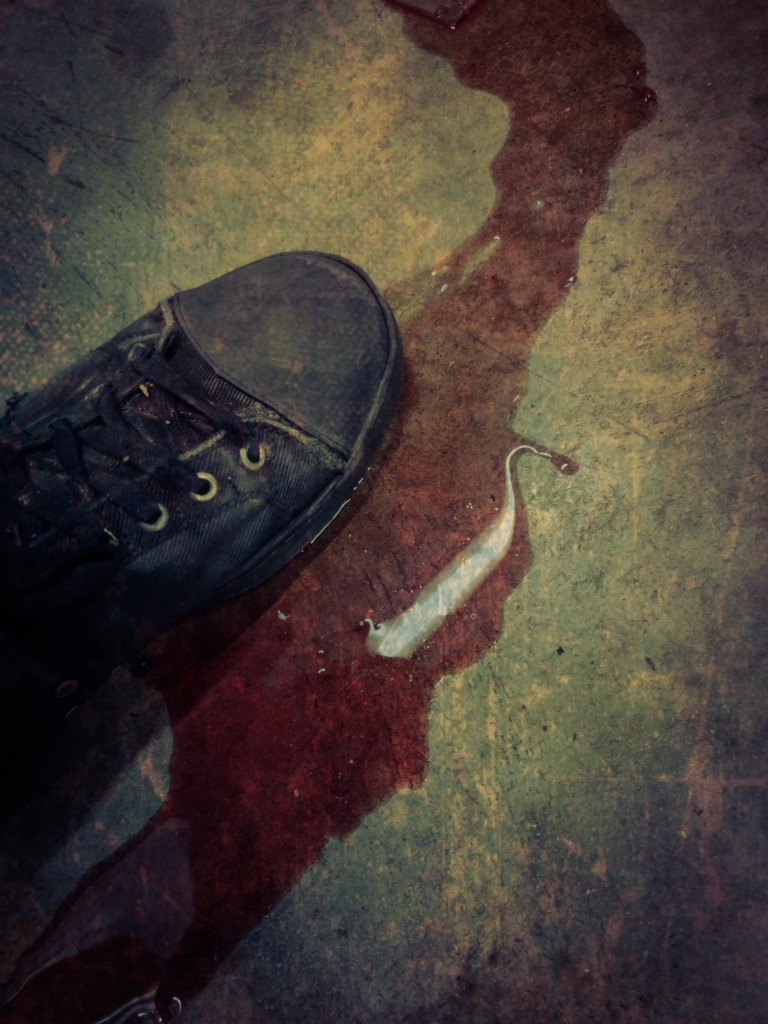 Taking unconventional characters and making them unconventional is a good way to pass the time. I can relate to the female stranger because I am her. I don’t listen to everything that everyone says to me. Three little mouths rambling on will do that to a person. Break said person down until there is nothing left, but thoughts of living homelessly in a city so far away from here. A fantasy so real at this point it feels more like a past life I am trying to remember than a dream inside my head. But I love them. Each and everyone of their tiny little necks. I just want to hold them tight and never let go. Children are little miracles that never stop taking and taking. There was a point somewhere in all of this. I lost it and I don’t even care anymore.

Leaking Ink Like It is Blood
Because It is All We Know
is That a Funeral?